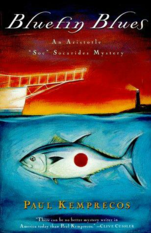 Three centuries after the pilgrims set foot on
Plymouth Rock, some Indians are still on the
warpath. So when a workman is tomahawked to
death at the replica of a three-hundred-year-old
Pilgrim village, suspicion falls on Joe Quint, the
Native American activist whose threats to hammer
Plymouth Rock into gravel have cast him in the
spotlight.
The murder case seems open and shut until Cape Cod fisherman-diver-detective Aristotle “Soc” Socarides is asked to investigate by John Flagg, his Vietnam comrade turned CIA spook. With millions in Indian casino gambling profits at stake, Soc soon finds himself betting his life in a high-risk game that could end with a single roll of the dice.
Soc must run the gauntlet between a federal agent with blood in his eye and the militant Indian Warrior Society, dive into the deadly waters of a mysterious underwater cavern, expose a trade in illegal Native American artifacts, and rescue a kidnapped hostage. 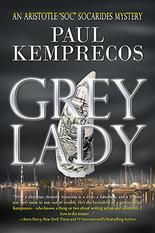 Cape Cod has become the world’s hotspot for
the Great White shark. In growing numbers,
scores of the fearsome predators patrol local
waters to hunt for their favorite prey among the
crowded seal colonies. But, unlike JAWS, where
a shark terrorized an island community, the
beasts that have flocked to the shores of the
world-renowned summer resort have been good for business. The spotter planes, shark warning pennants, beach closings, and occasional seal kills have created an air of excitement rather than fear. At least, that is, until Kirk Munson is found dead in Cape Cod Bay, and the suspected killer is a Great White named Emma.
Part-time P.I. Aristotle “Soc” Socarides has been too busy trying to keep his charter fishing business afloat while attempting to avert a family crisis to pay much attention to all the shark fuss. But when he and his faithful old pickup truck become collateral damage in what should have been a routine oyster poaching case, he takes Munson’s place steering a boat for a film crew shooting a movie based on the legend of the reputed witch, Goody Hallett, and the notorious pirate, Sam Bellamy.
As if things aren’t complicated enough, an old flame wants Soc to prove Emma is innocent. And a fading movie star Soc has admired for years requests his help dealing with a gang of murderous thugs acting under the orders of an international war criminal. It doesn’t take long for Soc to find himself swimming in dangerous waters, where he learns the hard way that the most dangerous ‘sharks’ are the two-legged species. 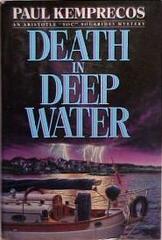 The shiny new charter fishing boat financed with
family money was supposed to launch a bright
new career for Cape Cod fisherman, diver, and
private investigator Aristotle “Soc” Socarides. But
when the slip of a beer-oiled tongue brings the ire
of a Russian KGB mogul down on his head, Soc
finds himself drowning in a sea of troubles. As he
looks for a foothold on the sandy shores of Nantucket Island, Soc discovers more than he ever bargained for: a deranged homicide suspect who thinks he’s Captain Ahab and Soc is his first mate Starbuck; a high-seas case of murder and cannibalism that still stirs up emotions; a Cold War secret; a missing whaling artifact with a bloody history; and cutting-edge underwater technology with deadly potential. As he gropes his way through the Nantucket fog that shrouds the lonely moors and beaches, Soc will soon discover that “the little, grey lady of the sea,” has a dark side the tourists never view, and that a single misstep can be fatal. 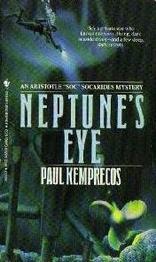 It was tough deciding what book to pick for the discount deal. I chose Mayflower after a lunch my wife and I had with new friends

The restaurant was on Plymouth Harbor, steps from Plymouth Rock and the Mayflower II, a replica of the original ship that is open

to the public. The conversation turned to the Pilgrims, and that led to the story of Frank James.

Frank was a talented musician, high school music teacher on Cape Cod, scrimshaw artist and silversmith. He was also a student of the bumpy relationship between his tribe, the Wampanoag, and the Pilgrims. His Wampanoag name was Wamsutta. He wore a wide-brimmed hat decorated with a silver band. The bumper sticker on the turquoise Corvette he drove read Custer Had It Coming, which should have alerted the planners of the 350th anniversary celebration of the Pilgrim landings back in 1970.

The planners thought it would be a good idea to have a Native American talk about the legendary friendship between the Wampanoag and Pilgrims, culminating in the first Thanksgiving. They asked Frank to write and deliver a speech, apparently unaware his perspective would be different from theirs.

Instead of lauding the ties between the Pilgrims and Wampanoag, the speech described the discrimination he and other Native Americans had suffered at the hands of the white man. He was a bit harsh on the Pilgrims, and especially their descendants, for stealing Indian corn and land, and for the white man’s generally shabby treatment of a proud people. The planners saw a copy of the proposed speech and after they picked themselves off the floor, they had a public relations person write a new version more in line with the popular, but erroneous popular perception of the complex relationship between the Indians and the settlers.

Frank refused to give the sanitized speech and later went on to join protesters at Plymouth Rock. I wrote about the speech suppression as a reporter for the local newspaper. The story went the seventies equivalent of viral.

Years later I left the news biz to write the Aristotle “Soc” Socarides private detective books. In writing Mayflower I drew upon my memories of Frank as my inspiration for an outspoken fictional Native American activist named Joe Quint. Soc is asked by his pal John Flagg to help Quint who has been charged with the murder of the night watchman at Plimoth Plantation, the reproduction of the Pilgrim settlement at Plymouth. Only problem, Quint doesn’t want his help.

I’d been thinking about a discount deal for one of my books as a way to reward old readers and attract new ones. The choice of The Mayflower Murder also gives me the chance to recognize the contribution Frank made to the Native American cause, and to me as an author. And besides that, it’s a danged good book! 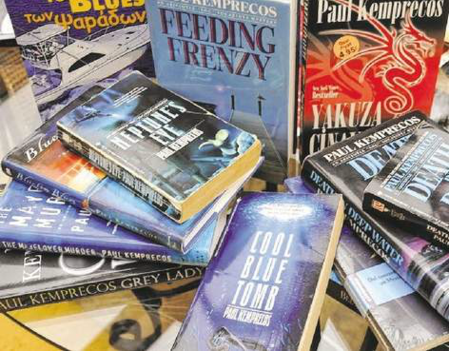 For Aristotle “Soc” Socarides, diver, Cape Cod
fisherman, and sometime private investigator,
summer on Quanset Beach can have its irritations.
The throngs of pushy tourists who converge on
the town turn everyday events like parking and
finding a seat at a bar into headaches, and the
heat and humidity make fishing expeditions
grueling tests of endurance. Still, for all his griping, this is home, and Soc likes it.
Likes it, that is, until the day horrible screams shatter Quanset Beach’s calm. A swimmer is attacked and killed by a mysterious aquatic predator, his body viciously disfigured in a way that is unlike anything ever seen. The town goes into a state of complete panic, and when another swimmer is mutilated, and bodies start coming ashore, Soc knows there is no time to lose.
Time is something Soc already has little of, though, for he has agreed to help beleaguered Tillie Talbot, the owner of the Quanset Beach Sailing Camp for children. The camp is set on prime waterfront real estate, and Tillie has repeatedly fought off aggressive developers looking to buy. But now sinister forces are at work to bankrupt Tillie and make her sell—forces that, Soc learns, have ominous levels of power in local and state government. And, as if Soc didn’t have enough to think about, his mother coerces him into trying to shake some sense into his cousin Alex, a spoiled young punk who has started running with a particularly nasty crowd. Add to that a messed-up love life and you have all the ingredients for a thoroughly rotten time.
And then John Flagg shows up in Quanset, and Soc knows that things are about to go from rotten to surreal. A sinewy ex-commando with ice in his veins and a wicked mean streak, Flagg is an old friend who does odd, unsavory jobs for the CIA, and his sudden interest in the Quanset Beach attacks is definitely not a good sign. Other groups in Quanset are interested in the attacks as well, and some of them make the CIA look like Cub Scouts. As usual, Soc is in completely over his head; one false step on his part could jeopardize national security at its highest level and cause him to be very dead. 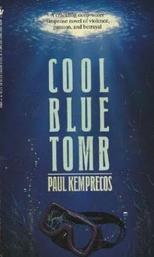 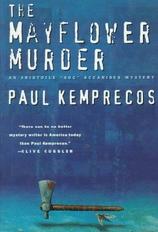 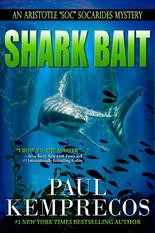 A 50-million dollar salvage operation. An expert diver dead at the bottom of the sea. An elegant mermaid in a black Porsche - and an open invitation to dip into the troubled waters of her marriage. Cape Cod's Aristotle "Soc" Socarides, part-time fisherman, part-time private eye, is swimming with the sharks. Only problem is, he's the bait...and blood is beginning to boil to the surface.

A simple missing-persons case: Find Frederick
Walther’s beautiful young daughter, who
disappeared after a love affair turned sour.
Simple, that is, until Leslie Walther’s lover turns
up dead in a fishy place—the seal pool at the
Woods Hole aquarium. Part-time fisherman
—part-time private eye “Soc” Socarides finds the
highly loathsome Tom Drake had a number of
acquaintances, business rivals, ex-lovers, and an ex-wife—all with reason to want him dead.
Soc’s investigation turns up so many knotted threads he could make a fishnet: a long-lost German U-boat, a cutting-edge underwater vehicle, corporate espionage, a shady munitions dealer, and a CIA spook from Soc’s distant past. Soc hopes the net will snare a murderer. But if he makes one wrong move, it could drag him down to a cold, wet, silent grave.

When whale trainer Eddy Byron is found
belly-up in an aquarium tank at Oceanus
Aquatic Park, it doesn't take much
imagination to locate his killer: the puncture
marks on Eddy's wet suit are a perfect match
to Rocky, an eight-ton hunk of killer whale
who's the park's star attraction. But for the
owners of Oceanus, who are in the middle of
delicate negotiations for the park's sale, it
becomes imperative that rocky be exonerated. Toward that end they hire cop-turned-Cape Cod private eye Soc Socarides.
Within hours of going undercover, Soc finds himself facing off with a bunch of ecoterrorists, flirting with a lovely dolphin trainer, and trading jabs with a mean-tempered cop who's collared him for murder. He knows he's in way over his head, but that's nothing compared to what awaits...when a two-legged predator moves in for the kill, desperate to make Soc food for the sharks.

Off the coast of Cape Cod, a Japanese bluefin
tuna buyer is found dead on another man’s boat,
a harpoon shot through his chest. The dead man’s
grandfather, a Japanese fishing tycoon, seeks out
part-time private investigator Aristotle “Soc”
Socarides to find those responsible for his
grandson’s death. Soc is desirable because he’s
also a part-time fisherman; because the man also knows that Soc is deeply in need of funds to repair his dilapidated fishing boat, he knows Soc’ll accept.
Soc can’t shake an uneasy feeling about the way the old Japanese man found him and the way he persuaded Soc to take the job: “It was almost as if he knew me better than I knew myself.” This realization should trigger a warning light in Soc’s head. Maybe it does. But now Soc is curious. And he still needs the money.
What starts out as a simple inquiry into a young man’s death to secure the peace of mind of an old man mushrooms into an excavation of the bluefin-fishing community. As Paul Kemprecos’s Shamus Award-winning p.i. is about to find out, it is a small, close-knit but competitive group, where the fact that a single tuna has a ten- to twenty-thousand-dollar price tag may inspire men to do evil. 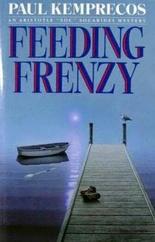