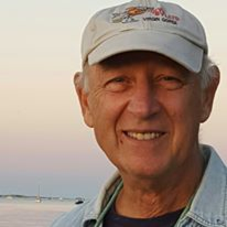 It could be said that my fiction writing career owes it start to the bad navigation of an 18th century pirate named Samuel "Black" Bellamy. For it was in 1717 that Bellamy’s ship Whydah went aground during a storm off Cape Cod, reportedly carrying a treasure in gold worth hundreds of millions of dollars. In the 1980s, three salvage groups went head-to-head as they competed to find and exploit the wreck.

At the time I was managing editor of a weekly newspaper called The Cape Codder. The reporter covering the Whydah left to take another job and I took over the story. The salvagers were a colorful lot and the controversy over the salvage got pretty hot at times, so I thought there might be a book in their story. I tried to peddle a non-fiction book, got a few nibbles but when the idea went nowhere I decided to use the material in a detective novel.

I had never written fiction or read much, but I had enjoyed the books of Raymond Chandler and came up with my own detective, and ex-cop, diver, Cape Cod fisherman and private eye named Aristotle "Soc" Socarides, using the last name of a high school English teacher who passed me despite my aversion to homework. He was more philosophical than hard-boiled, and he lived in a boathouse with a big cat named Kojak.

I found an agent, submitted some sample chapters and got a two-book contract from Bantam Doubleday Dell. Soc made his first appearance inCool Blue Tomb, and much to my surprise, the book won the Shamus award from the Private Eye Writers of America for Best Paperback novel. After twenty-five years in the newspaper business I had turned to writing fiction full-time and churned out five more books in the series.

Chance intervened again when my editor sent a copy of the book to Clive Cussler who gave it a great jacket review.

Clive usually gave out one review to a customer, but when the second book, Neptune’s Eye, made its appearance, he blurbed: "There can be no better mystery writer in America than Paul Kemprecos."

Four more books followed. Despite the accolades from the best-selling Cussler, the Soc series lingered in mid-list hell, the victim of low press runs and even lower promotional budgets. Royalties also took a slide and by the time I finished my last book, Bluefin Blues, I was tapped out creatively and financially, and thinking about another career that might make me more money, like working in a 7-11.

When Bluefin Blues came out I had sent a copy to Clive with the inscription: "Rumors of my literary demise have been greatly exaggerated."

Several months later Clive called and said a spin-off from the Dirk Pitt series was in the works. It would be called the NUMA Files and he wondered if I would be interested in tackling the job. I was flattered to be the first one he had called with the offer. I wasn’t sure I could make the jump from a regional private eye book to a globetrotting adventure.

My wife Christi closed the deal when she said: "What else have you got to do?"

Since the answer was a mumbled, "nothing," I took on the writing of Serpent which brought into being Kurt Austin and the NUMA Special Assignments Team.

Austin had some carry-over from Soc, like his love of philosophy, and another team member, Paul Trout, had been born on Cape Cod. The book made The New York Times best-seller list, as did every one of seven NUMA Files that followed, including one, Polar Shift, which bumped The DaVinci Code for first place.

I am now at work on my ninth book in the series. Christi and I live on cape Cod where she has her own financial services business. We live in a circa 1865 farmhouse with two cats. We have a total of three children and seven granddaughters who are, naturally, the most beautiful and intelligent young ladies on the face of the planet. We ski in the winter when we can, and do boating in the summer. And once in a while, in between the family and fun stuff, I crank out another NUMA Files novel and ponder the role of chance in our lives.