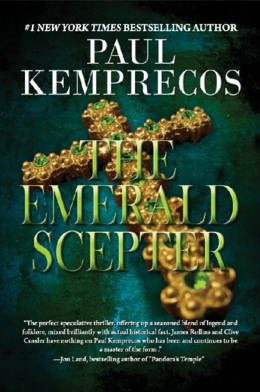 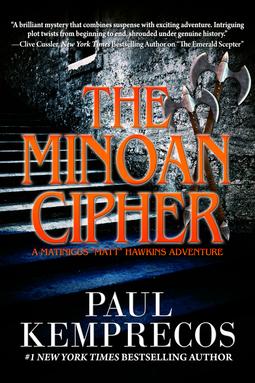 Realizing he is in over his head in more ways than one, Hawkins pulls together the team that backed him up in Afghanistan on the search for an emerald scepter: ex-wife Abby, who heads a global logistics corporation; Navy SEAL comrade and security expert Calvin Hayes, and Molly Sutherland, a computer whiz with a chip on her shoulder.
Hawkins will need all the help he can get as he finds himself in the sights of the Way of the Axe, a bloody cult that will do anything to keep its existence secret. Complicating his investigation are the machinations of a bizarre cast of characters: Viktor Salazar, the CEO of a rapacious mineral corporation who’s conspiring to destroy a promising new technology that could wean the world off of fossil fuels. Leonidas, the shape-shifting killer who can change his identity, and allegiances, with the swiftness of a chameleon. Lily Porter, the glamorous producer of an oddball reality show, who is not what she seems.
Even with back-up from his friends, Hawkins will have to use every mental and physical resource at his command to escape from the clone-like men in black with the blue-painted scalps, figure out how to get into a castle to rescue Kalliste from her long-fated death in the labyrinth, and outwit the monster guardian of the maze known as the Minotaur.

than the attack on the Twin Towers and rally others to the terrorist cause. Hawkins sees his mission to foil the plot as an opportunity to search for answers. He pulls together an eclectic team that includes his ex-wife, a former comrade-in-arms and a mentally unstable computer whiz. Backed by his unlikely team, Hawkins will travel thousands of miles and hundreds of years on an amazing time-space odyssey. He'll face off against a cold-blooded killer. Probe the underwater secrets of an ancient tomb. Navigate the treacherous stands of an unimaginable conspiracy. And in the process, will discover that there are treasures even more valuable than gold.
New York: Suspense Publishing
ISBN: 0-615-804551
Published May, 2013

When robotics engineer and ex-Navy SEAL Matinicus “Matt” Hawkins gets a call asking him to survey a shipwreck off the coast of Spain, he jumps at the chance to dive on what may be an intact Minoan vessel, a discovery long considered the Holy Grail of underwater archeology. The find could rip the covers off the mysterious civilization that flourished thousands of years ago on the island of Crete.
But as he descends in his submersible to the ocean bottom with Greek archeologist Kalliste Kalchis, Hawkins soon learns that an invisible No Trespassing sign has been posted on the wreck and violators will be killed. Sinister forces quickly make it clear they will do anything to retrieve the ancient translating device he brings up from the deep.

Something bad happened to Matinicus "Matt" Hawkins in Afghanistan. The ex-SEAL was grievously wounded in an ambush that killed men under his command and almost ended his life. When he pushed for an investigation, he was kicked out of the Navy with a psychiatric discharge. The doctors put his shattered leg back together, but the bitterness destroyed his marriage. Five years later, Hawkins is jerked out of his tranquil life as a designer of undersea robots. A super-secret government group wants him to go back to Afghanistan on a strange and dangerous mission. A Georgetown University historian has unearthed evidence that could lead to the fabulous treasure of Prester John, a legendary Christian ruler of an eastern empire. The historian has disappeared, and the government wants Hawkins to track down the treasure as a matter of national security. The centerpiece of the trove, an emerald-encrusted gold scepter, is the linchpin in the Prophet's Necklace, code-name for a plot that is intended to kill more people